Yes, it really is true.

I’ve been writing since I could hold a crayon. 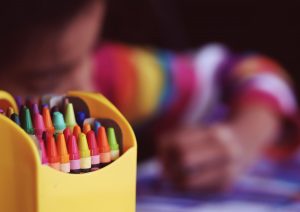 For the past 40 years, I have been teaching all ages of people how to become better writers.

My father was an English teacher, journalist, radio and TV broadcaster, speech teams coach, and a favorite director of many high school musicals and community theater groups. However, his lessons about the use of our language were far surpassed by his examples of how to tell a good story.

Much of what I learned from him about this skill came as he talked to us every night at dinner, or as we recalled and requested the familiar tales of our shared family history around the table at holidays.

I began rewriting essays for my friends in high school. (Yes, really.)

I went to an Ivy League school and majored in English. As an afterthought, I got a minor in education and wrote for the college paper.

Some years later, I looked at my first class of fifth and sixth graders and told them that we were going to try something new in our classroom—Writers’ Workshop. Neither my students nor my colleagues had ever heard of such a thing.

Mostly, they were amazed that we could move 35 students through several stations each day—and use the only computer in the classroom to produce printable books.

Shortly afterward, I received funding to get internet in our classroom. For one computer. For 35 students to use. Yes, it was a hundred years ago.

Fast forward to the days when my son said that his school was participating in a district contest called “Celebration of Writing.” The teachers said that each child could submit one story, but it had to be completed outside of class time and submitted in three weeks.

My son said, “I have a really good story in my head, but I can’t get all the words onto the paper. And I want my story to look like Don and Audrey Woods’ books, with the words being a small part of the page and the pictures filling up both pages.”

So we began. He narrated. I typed. We read the story together, and he changed the parts that he thought needed work. He drew his illustrations, and they indeed covered both pages, while the text took up a small corner.

He produced five books over five years, and each one is a treasure to me. Yes, he received awards for them, but more importantly, I had the opportunity to cheer on my child’s interest in writing.

Some years later, my younger son looked out the window of the backseat from his car seat. He said, “Full moon, dark skies, stars shining bright.”

I turned around and said, “I didn’t know you were a poet!”

For weeks after that, every time he said something like that, I pulled over and wrote down his words on whatever happened to be available. That Christmas, he gave everyone in the family a hardcover book of his poetry with illustrations. He titled the book “It’s Good to Wonder.”

In the years that followed, he provided the narration for every book we had printed for our family vacation photos. The kid is hysterical, and it was important to capture that.

So why do I tell you all of this?

I want you to understand that there is a writer inside of each of us. I love helping that writer take the stage and shine in the spotlight.

This past spring, I worked with a fifth grader across the country as her online writing coach in order to get her story published. At the same time, I helped a friend work her way through her first college course on writing; she is a thousand miles away, but we worked through her papers on Google Docs.

And now that I have begun to publish my own books, friends and family are inspired to do the same. I’m honored to be able to help them improve their writing.

Do you have something that you’re working on? Need some writing, editing, and proofreading help with it?

My professional editing and writing services range from coaching to proofreading and from minor editing to major manuscript editing.